The Duke and Duchess of Cambridge’s 2011 tour of Canada was my first introduction to a royal tour (albeit from afar).

With the help of royal reporters on the ground, other bloggers and I were able to identify items that would come to be synonymous with the name “Kate Middleton.”

There were also, of course, quirks here and there that those of us who’ve been covering Her Royal Highness have come to recognize (hello, Marilyn Monroe moments!). 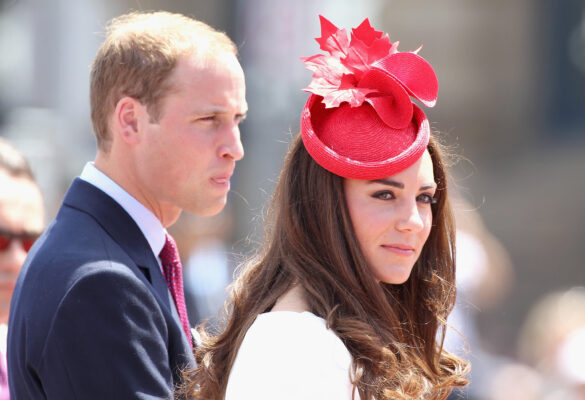 All in all, it will be wonderful to pick up where we left off come September 24th.  This time, two little royals will be joining the couple, making way for new traditions us royal watchers cannot wait to witness.

So, what were some of that tour’s defining moments?  Let’s take a looksie. 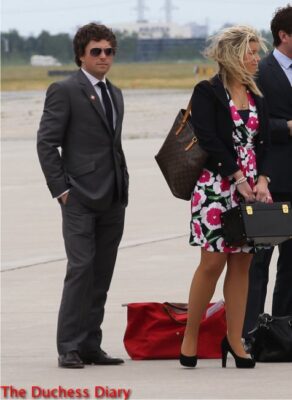 Admittedly, I wasn’t introduced to Natasha Archer until the 2014 Australia/New Zealand tour.

Archer, who works as a personal assistant/stylist for Catherine’s team, was one of the few people who were allowed inside the Lindo Wing at St. Mary’s Hospital when Prince George was born in July 2013. 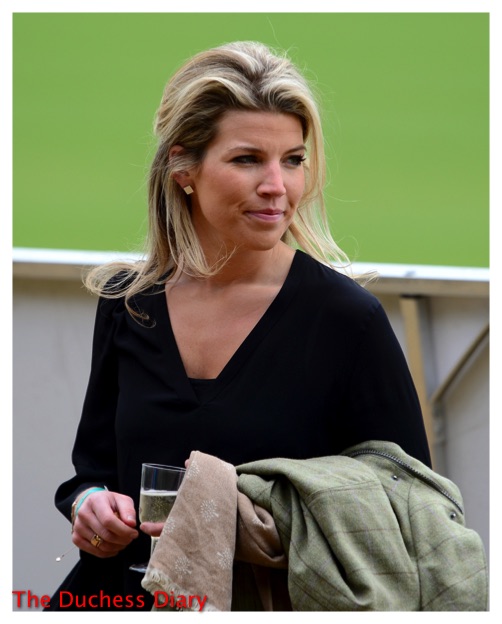 Archer is credited with sharpening up Catherine’s style a bit, steering her towards more regal, polished looks befitting a future consort.

PS – the man next to Archer in the above photo from June 2011 is James Pryce, a stylist formerly of the Richard Ward salon who used to work on Catherine’s hair.  He and Ward are responsible for Catherine’s wedding day hair do.

The Rise Of The Lace Trend (And An Introduction To Erdem) 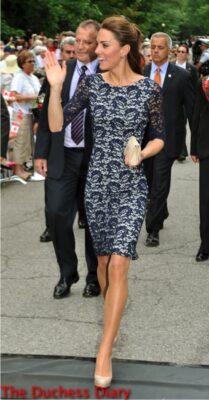 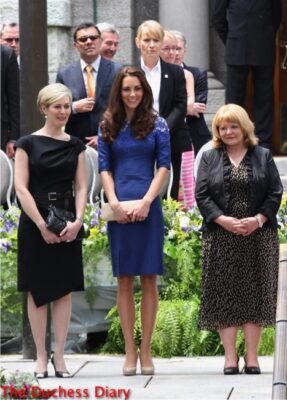 Call me crazy, but I believe it was this moment that defined a trend.  The Erdem navy lace dress has since been replicated by several designers, including Diane von Furstenberg.

This was also the first time I learned about Erdem, a Montreal-born designer based in London.

Catherine was doing her part to promote British designers and those who call her host country home, something she’d become famous four on future royal tours.

The End of Issa 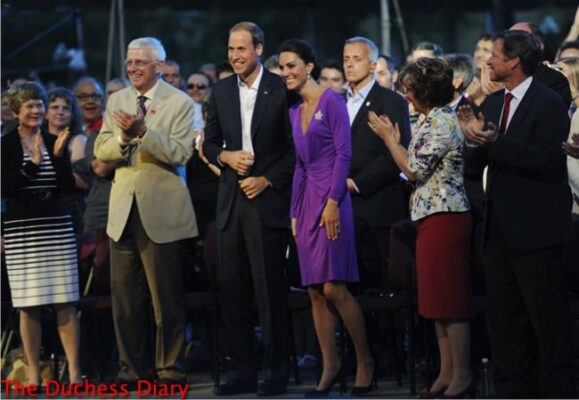 As much as fans loved the way Issa’s designs looked on Catherine’s lithe figure, this tour would be the last time Her Royal Highness would wear one of  Daniella Helayel’s designs. 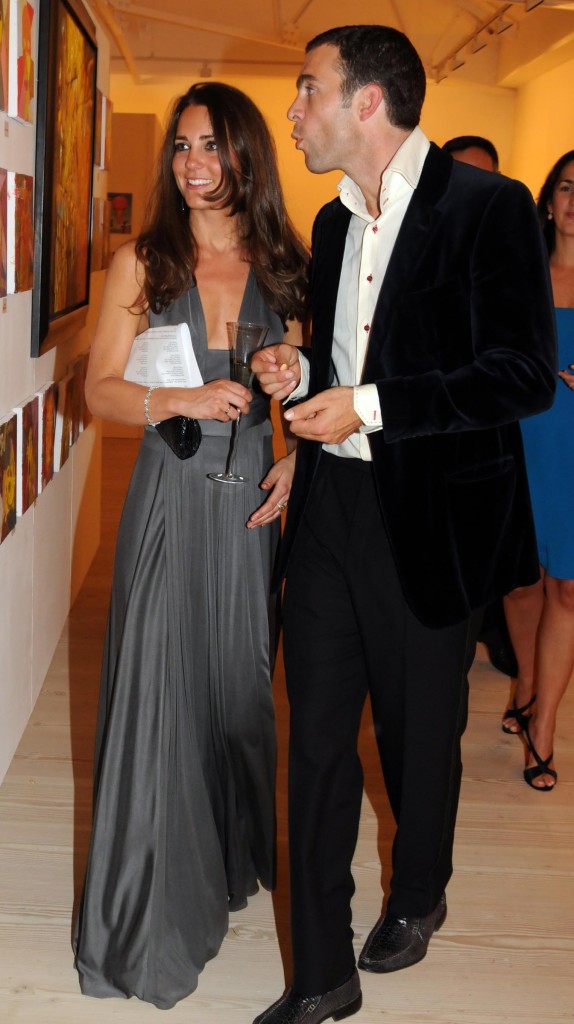 In July 2011, the Telegraph confirmed that Helayel sold a 49% stake in the company to Camilla Al Fayed, the daughter of former Harrod’s owner and anti-Windsor fanatic, Mohamed Al Fayed. 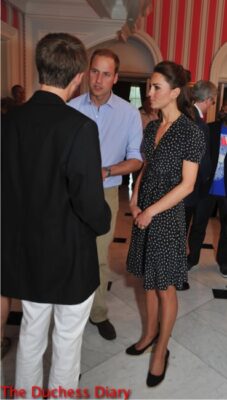 Dodi Al Fayed was dating Prince William’s mother, Princess Diana when the two were involved in a fatal Paris crash in August 1997.  Mohamed launched a smear campaign against the royal family soon after, accusing them of murdering the Princess of Wales. 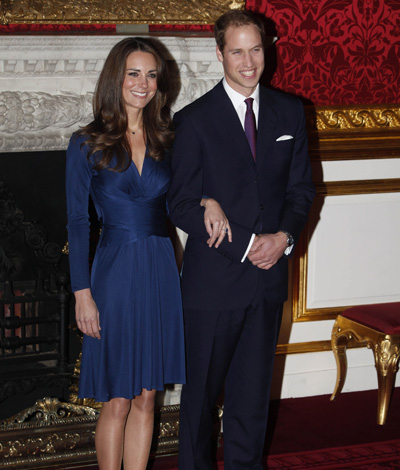 Catherine, who is always very careful not to draw negative attention to herself, quietly distanced herself from the brand the same month the deal was confirmed.

Heavens To Betsy, It’s An Upskirt! 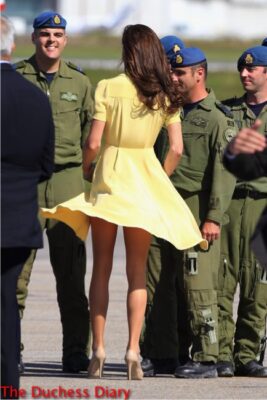 When the Duke and Duchess landed in Calgary to round out their Canadian tour, Catherine wore the most darling buttercup yellow dress by Jenny Packham.

Unfortunately, the airport’s tarmac provided a little too much wind, sending the skirt of that darling dress ring up.

Quite honestly, Catherine should pat herself on the back.  Look at those stems! 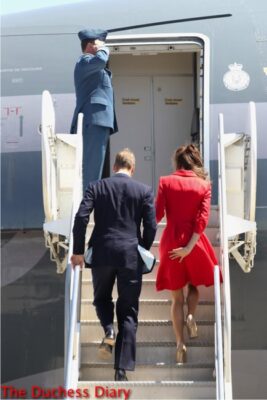 Since then, it’s been reported that the Queen has suggested Catherine have small, light weights sewn into the hem of her dresses so as to avoid this issue in the future. 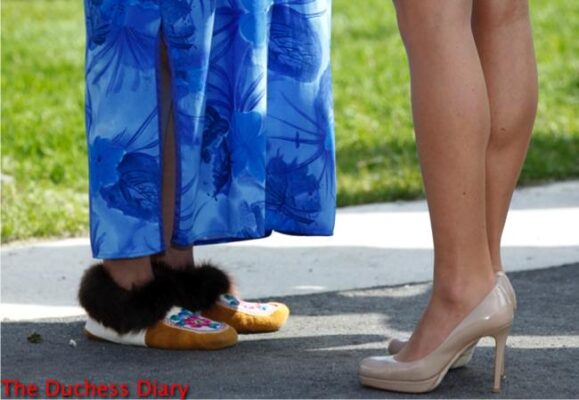 Soon, the pumps became Catherine’s most iconic look, and every woman all of a sudden needed a pair of round-toe nude pumps. 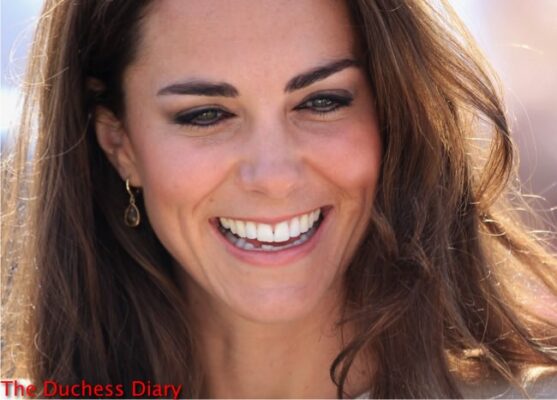 While royal watchers wouldn’t be mesmerized by British jeweler Kiki McDonough’s work until that Christmas (William was said to have gifted Catherine with these beauties), these citrine pear-drop earrings would fast become a staple of Catherine’s wardrobe.

While it’s almost certain that Catherine will pack some oldies but goodies for the week-long tour, expect to see her pack some sportier looks since this trip sounds like it will be pretty family-oriented (think chasing after George and Charlotte when they make a beeline for wildlife). 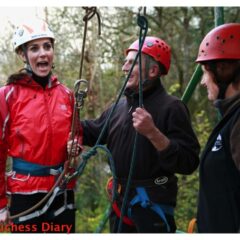 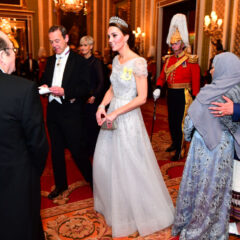 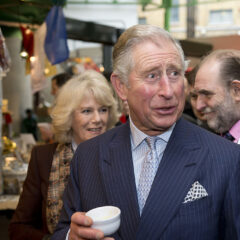