Over the last week, countless sites have speculated as to what the Duchess of Cambridge will wear when she and Prince William visit New York from December 7th-December 9th.

Given that Her Royal Highness is five months pregnant, I’m afraid we won’t see the waist-cinching outfits we’re used to.  It’s also quite cold out, so prepare yourselves for a lot of (great-looking) coats.

For security reasons, I would also be surprised if William and Catherine sat courtside at Monday night’s Brooklyn Nets vs Cleveland Cavaliers game.  If anything, I believe they’ll watch from a private box (probably will Jay-Z and Beyonce).

We can all but guarantee that Catherine’s Aquatalia “Rhumba” boots and Stuart Weitzman for Russell & Bromley “50/50” boots (worn to a SportAid engagement in November) are packed.

It’s difficult to predict what Catherine will wear to Tuesday’s St. Andrews dinner inside the Met.  Most of her items from Jenny Packham and Alexander McQueen are custom-made variations of off-the-rack items, so perhaps Catherine will go with one of Packham’s flapper designs (reminiscent of the one HRH wore to ARK’s 10th anniversary gala in June 2011).

I’m also going with “no hats/fascinators” for this trip because Americans don’t do headwear.

Kate fans would like their patron saint to wear American designers on the tour (Michael Kors, Oscar de la Renta, Ralph Lauren), and while she’s a fan of Diane von Furstenberg, something tells me that Catherine will fly the flag for British designers (Beulah London, Katherine Hooker, Emilia Wickstead).

Then again, she could surprise us like she did in Singapore by wearing Prabal Gurung.  There’s also a good chance that outlet finds make their debut (Catherine scooped up Roland Mouret and Missoni at the Bicester Outlets).

What do you think about these predictions?  Am I so off the mark it ain’t even right? 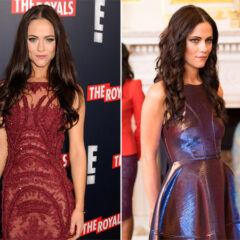